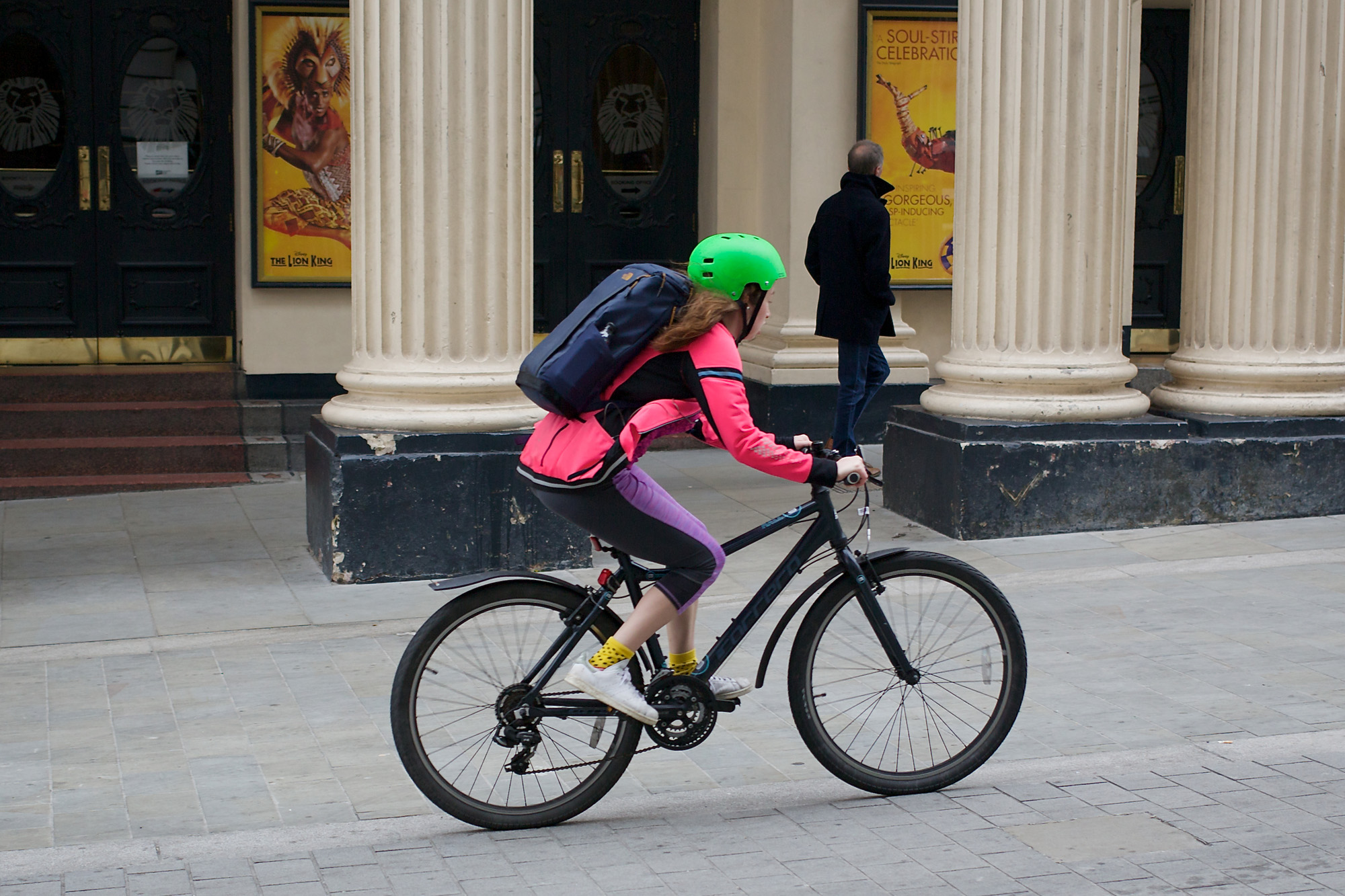 The most admired photographs tend to be those that are carefully composed, nicely lit and technically perfect. However, I want to put in a plea for the “fleeting image” — the photo taken rapidly “on the fly” just as the subject (or the photographer) is moving out of range.

Sometimes a subject comes out of nowhere: a skateboarder hurtling down the street, crouching low with arms outstretched. You may not hear him until it’s too late. He’s already gone past, leaving you to wonder if the shot would have captured a moment of athletic beauty — or just another scruffy youth in a hood, against a jumbled background of traffic and pedestrians.

If you pause to think twice about it, pondering whether the shot is worthwhile or not, then obviously you’ll miss it. You have to tell yourself in advance: if even half an opportunity comes along, grab it! It costs nothing to take the shot, except perhaps a loss of confidence if you consistently fail.

What’s the Message?
I don’t think a street photo needs to have “a message,” as such, but it does need to reward the onlooker for taking the trouble to view it. In the case of the “fleeting image,” the sense of ephemerality embodied in the choice of subject should be enough.

Fleeting images lack detail and tend to be very simple — perhaps too simple for the jaded viewer who sees ten thousand photos a week. Take my featured image (above), for example. It’s just a girl on a bike. What’s the big deal?

That’s the point. There is no big deal. In London you can see people on bicycles all day long, pedalling through the streets or slotting themselves neatly between gridlocked cars and buses. As a motorist I find them tiresome — difficult to see in a rear-view mirror and a constant danger to themselves and others.

When I’m out of the car and on the street, walking around with a camera, I can appreciate the fleeting beauty of a cyclist: appearing and disappearing like a brightly-coloured mayfly on the river bank. This girl, in particular, was wearing four bright colours, making her “high-viz” without resorting to an ugly orange vest. I commend her dress sense. It seems to have given her the confidence to ride at dizzying speeds through Covent Garden.

My fast shutter speed has frozen the action, apart from some blurred spokes in the wheels — and no, I’ve no idea why they’re blurred at the top and not at the bottom. Perhaps someone at MIT can advise.

In this image I like the contrast between the cyclist’s ultra-clean presentation and the worn exterior of the Lyceum Theatre. A lone pedestrian reads the words “soul-stirring celebration” and “gorgeous…(gasp-inducing spectacle?).” Everything black is in the right place, and for once I’m not too worried about the bare paving on either side of the subject. At least it’s textured.

The Passing Glance
My largely cinematic style of street photography makes the majority of my shots “fleeting images” of one sort or another. Sometimes the effect is more pronounced, at other times both my chosen subject and I are static and the result is far from being transitory.

To get the full effect of a fleeting image, either you or the subject needs to be on the move. Here’s an example (below) where the subject — a woman in a black tee-shirt — is walking quickly past a stall, carrying some food in a bag. Has the man behind her smelled the food? Or has he noticed the woman herself? His look is little more than a “half glance” out of the corner of his eye. It’s all over in a split second and you’d never notice it without the help of the camera. 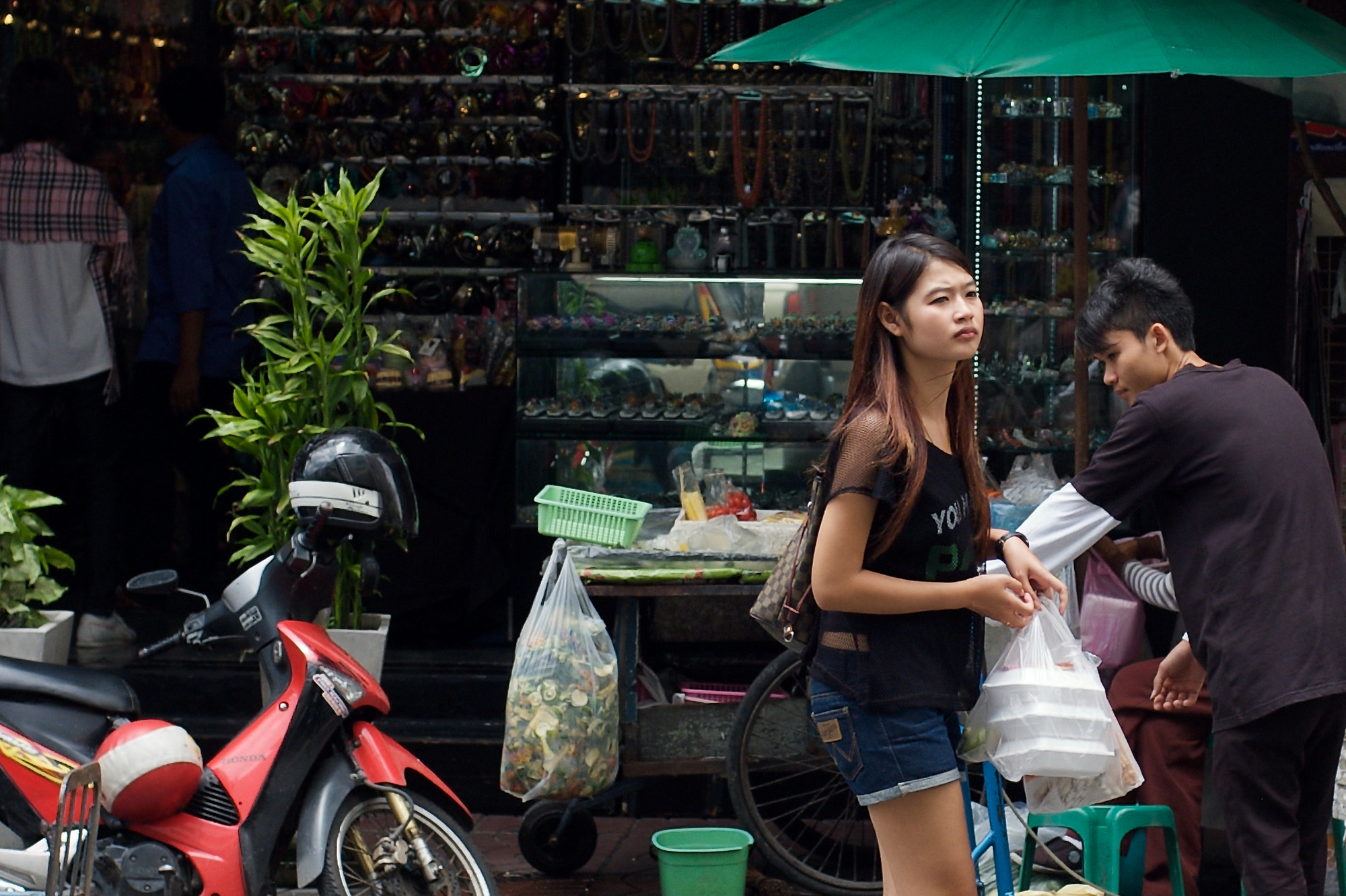 The Moving Photographer
Travelling through the streets of Bangkok by bus and taxi I rarely get an opportunity to take a well composed street photo. The movement of the vehicle tends to overload the senses, snatching away each composition as quickly as it forms.

You need to reduce your speed and cruise along at a snail’s pace — no, that’s too slow — at a pace not much faster than that of a normal pedestrian.

On one occasion I was riding in a “tuk-tuk” (windowless three-wheel taxi) when the driver made a perilous U-turn to avoid queuing in traffic. Before he gathered speed again I took this shot (below) of two women staring blankly into space. The late evening light was poor, but I’d had the forethought to switch to ISO 800 and succeeded in getting a sharp image.

Is it a “fleeting image”? Yes, as far as I’m concerned, because I know the circumstances under which it was taken. It couldn’t have been more fleeting! But I admit it looks almost posed, as if I’d asked the two women to light cigarettes at the same time, and to cross their legs in the same direction.

Yet there’s something odd about the image which lifts it out of the ordinary. The woman on the left — the one with a floral tattoo on her shoulder — has a beer mat stuck to the underside of her bare thigh. I can only guess that it was there on the wooden seat when she sat down a few moments previously. A second or two ago she probably crossed one leg over another and the sensation of the clinging coaster had not yet registered in her brain.

Neither of the two women looks fully awake. They seem hot and tired at the end of the day. There’s no movement, or indeed anything at all dynamic in the photo whatsoever. Yet I still claim it as a “fleeting image.” Had I been standing in front of them, pointing a camera in their direction, I would have awakened their interest. They would have reacted — and their response would have ruined the effect.

If you ask me to describe “the effect,” I’m forced to search for the right words. I can’t find them, except to say: for once I was moving more quickly than the subject and I feel as if I’ve stolen this snapshot in a hit-and-run fashion, before the subject has become aware of it. Just like the beer mat. 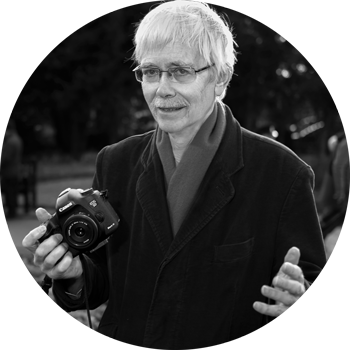 ​To stay updated with my latest published articles, exhibitions and projects, feel free to join my e-mail newsletter.

It's spam-free and I'll only e-mail you when I think you'll find something ​ interesting, intriguing or useful!

Free email newsletter ​for serious street photography enthusiasts.
​In-depth analysis, op​inion and tips. ​
No spam - I will only send you quality ​articles that I think you will find interesting.

This site uses Akismet to reduce spam. Learn how your comment data is processed.

Scroll back to top