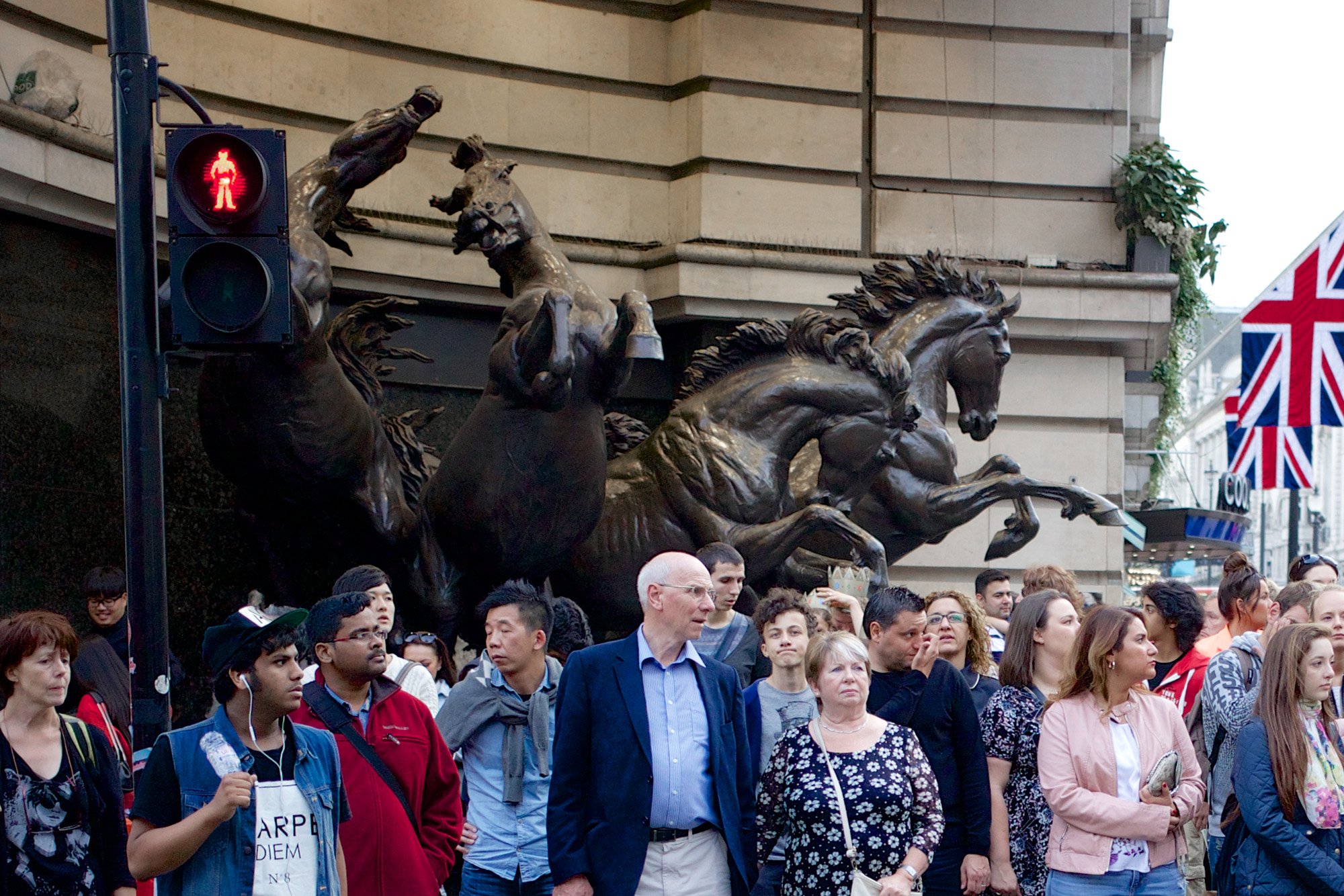 Before our great cities were locked down, making their streets deserted, they were places of swirling humanity. In fact, in the busiest areas the scene could change dramatically in a few seconds.

Here are my observations about this phenomenon, written before the world was paralysed by SARS-CoV-2 from Wuhan.

So Many Opportunities
Big cities offer far more opportunities for street photography than you’ll ever find in a small town. Why? Not necessarily because they’re bigger but because they contain huge crowds of people who gravitate towards the most popular areas.

I hasten to add that you can take masterpieces of street photography in small towns. (The work of William Eggleston springs to mind.) But to make your task a little easier you really need the flow of the multitude, the variety of faces and physical types, the quirks and oddities you get when millions of people huddle together in a few square miles.

A Sudden Insight
When I was hunting for a photo to illustrate an article called “Does Street Photography Look Wrong If the Image Isn’t Straight?” (not yet posted) I discovered the image you see above. I looked at it closely and to my astonishment I noticed an extraordinary detail — one which is the inspiration for this article.

As a result, I can now prove that the modern city changes from minute to minute with such amazing rapidity you can take photos that differ radically from each other in both mood and visual content — even when taken just a few seconds apart.

The people in the photo above are waiting for traffic to clear before crossing a road near Piccadilly Circus in London. They seem to be mostly bored or agitated, impatient to resume their relentless flow after being put temporarily “on pause.”

Looking Closer
However, there’s one exception. If you look at the far left, arrowed in the version shown above, you’ll see a Chinese gentleman in a very cheerful mood, laughing and chatting with a woman in red. I’m not sure why he’s laughing. There’s a large bag of rubbish precariously suspended on the pigeon spikes immediately above his head. (London is full of lavish monuments, but it’s a bit untidy in unexpected places.)

I immediately recognised the man in question: he’s the person smoking a cigarette in another picture, one I’ve called (for want of a better title) “Checked Out.” I was intending to use this shot for an article called: “Does Street Photography Look Wrong If the Image Isn’t Straight?” (not yet posted).

Incidentally, I have no idea whether this couple were checking in, checking out, or just back from shopping. However, I can tell you that they were clearly “on pause” and enjoying it, having a break from the flow of the crowd.

But what crowd? There’s no sign of any crowd in my photo of the couple although they’re clearly in the same location. Can the city have changed so dramatically in such a short period of time?

Checking Out the Data
All these questions prompted me to look up the EXIF (detailed information which accompanies each image as a side file, accessible with a photo editor). What I found was amazing. I had taken the crowd photo at 16:55 and 20 seconds and the photo of the couple at 16:56 and 23 seconds. In other words, I’d taken the two images just 63 seconds apart!

Just think of all the changes that happened in that long minute. The crowd of people crossed the road. I must have walked a little way down Haymarket then doubled back to the Horses of Helios where I photographed the couple. By this time, the woman with the red coat has removed her shoulder bag (it’s on her shoulder in the first photo) and taken out her phone. The man has stopped laughing and has sat down and begun smoking a cigarette.

When I’m in reflective mood, like the man at 16:56 and 23 seconds, I try to figure out a mathmatical theory for estimating the number of street photography opportunities that occur each day in our major cities. I think the number just leapt from billions to trillions.

The mood and visual appearance of a city can change in the blink of an eye. Go with the flow, attune yourself to its rhythms, and try to grab at least one or two of the trillions of opportunities being offered to you.

Alas, all of those things will have to wait until our streets return to life.